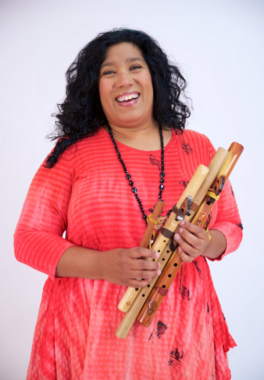 Jessica Valiente began her music studies on recorder at the age of five, when her mother introduced her to the instrument and began to teach her at home.  It was not long before she was playing chamber music with her parents and their friends.  In school, she took up the flute and followed a traditional path to conservatory study in New York City.

She began to expand into jazz improvisation and studies of traditional musics from all over the world 10 years into her classical performance career.  Her musical interests reflect her family's mosaic heritage, including African-American traditional and popular styles, music of the Spanish-speaking Caribbean, and indigenous music of both North and South America.  She specializes in Cuban charanga, Brazilian choro, Latin jazz and straight-ahead jazz, historically-informed performance practice, and performs on traditional Native American style  flutes and Andean flutes.

Dr. Jessica Valiente holds a B.A. in music from Barnard College in conjunction with Manhattan School of Music, an M.A. in music performance from the Aaron Copland School of Music (Queens College, CUNY), and a D.M.A. in music performance from the Graduate Center of the City University of New York.   She is a 2014-2015 recipient of the American Association of University Women (AAUW) American Dissertation Fellowship for her dissertation on charanga entitled: “Siento una Flauta: Improvisational Idiom, Style, and Performance Practice of Charanga Flutists in New Yorkfrom 1960 to 2000.” 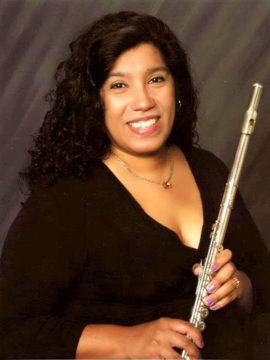 Her debut in the Latin music scene came when she took over the flute chair in the conjunto of legendary mambo/pachanga-era bandleader, Orlando Marín, while also frequently performing with the critically-acclaimed bilingual Spanish/English theater company, Teatro Pregones.  During these years, she also maintained her position in the world of early music, performing on recorders and renaissance flute with the internationally-renowned bilingual Italian/English commedia dell'arte troupe, I Giullari di Piazza.

Today, Dr. Valiente is known primarily as the musical director of Los Más Valientes, the salsa and Latin jazz ensemble that she has been directing since 1995. Together, she and her band have produced and released three CDs on the Laughing Buddha label, and one on the 706 Music label, all of which have received wide critical acclaim.  She also performs on flute and piccolo with the Brazilian choro ensemble, Choro Down Neck, while staying in touch with her classical music roots, as flutist with the chamber ensemble Trio Non Sequitur, and as recorderist and baroque flutist with the Fieldstone Early Music Ensemble.