Dr. Jessica Valiente is a flutist, recorderist, bandleader, and scholar.  A conservatory-trained classical musician, she began to expand into jazz improvisation and studies of traditional musics from all over the world ten years into her classical performance career.  She specializes in Cuban charanga, Brazilian choro, Latin jazz and straight-ahead jazz, and early music on recorder and historical flutes.  She performs on traditional Native American style flutes and Andean flutes.

Dr. Valiente holds a BA in music from Barnard College in conjunction with Manhattan School of Music, an MA in music performance from the Aaron Copland School of Music (Queens College) and a DMA (Doctor of Musical Arts) from the CUNY Graduate Center.  She is a 2014-2015 recipient of the American Association of University Women (AAUW) American Dissertation Fellowship for her dissertation on Cuban charanga bands in New York City from 1960-2000.

"Ms. Valiente is a kick-butt flutist with a flair for both Jazz and Cuban music.” Chico Alvarez, WBAI

“Valiente … has a fresh approach to the flute that is very appealing. … Valiente stands out … through conception rather than raw technique.

That she has technique I can attest… But she also has a wealth of knowledge about both jazz and Latin forms which she has applied both to the development of the group sound and to her role in it.”  Peter Westbrook, Jazzreview.com 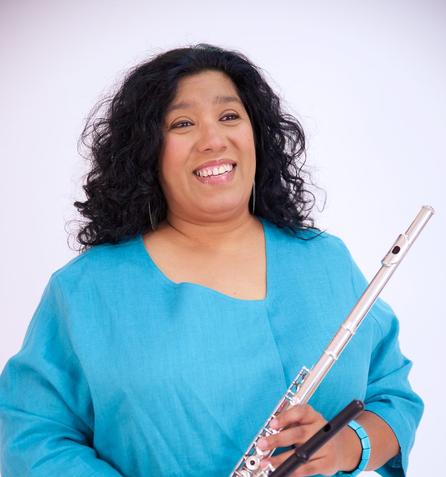 “Valiente is a flautist of the first rank, and performs endlessly inventive solos.” John Radanovich,The Record

​Performer and researcher specializing in classical music, jazz, Latin, and Brazilian styles, recorder, historical flutes, and traditional and indigenous flutes from around the world.